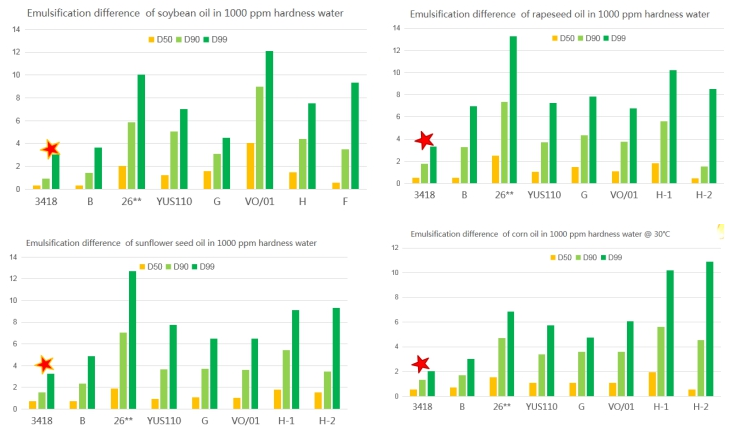 Note: The smaller the particle size is, the better the emulsification is. The small particle size of SP-OF 3418 sample represents its excellent emulsifying performance.

2. Influence of emulsification temperature and water hardness on emulsifier

SP-OF3418 has better emulsification and hard water resistance ability than control adjuvant B in 342ppm×2 and 1000 ppm hardness water. Besides, its emulsification increases with temperature. Effect of 20% addition mount is better than 15%.

3. Application of SP-OF3418 in OD formulation

Comparison of 10% Nicosulfuron OD samples after thermal storage for 14D demonstrates that both SP-OF3418 and adjuvant B have better flowability than other adjuvants.

(2) 10% Nicosulfuron OD thermal storage samples in 342 ppm and 1000 ppm hardness water @30℃: The emulsifying performance of SP-OF3418 is stable and is the best among the four adjuvants.

(3) 10% Nicosulfuron OD RT and thermal storage samples in 342 ppm hardness water at low temperature (15℃): The emulsifying performance of SP-OF3418 is stable and is better than control adjuvant B.

After thermal storage for one month, 10% Nicosulfuron OD prepared by SP-OF3418 shows good flowability without sediment at the bottom of bottle.

SP-OF 3418 has good dispersing property, and it also shows good grind-aiding effect with high grinding efficiency. After grinding, SP-OF 3418 sample has lower viscosity without any adhesion to bottle.

3.5 Analysis of samples by stabilometer

Formulation prepared by SP-OF 3418 is the most stable sample during 54℃ storage.

SP-3418 gives the best grinding effect under the same condition, and its particle size apparently lower than other control adjuvants.

SP-3418 sample clearly shows better dispersing performance than control groups, and its particle disperses homogeneously without any agglomeration. It has no agglomeration even after thermal storage.

To the true, to the good, to strive for perfection